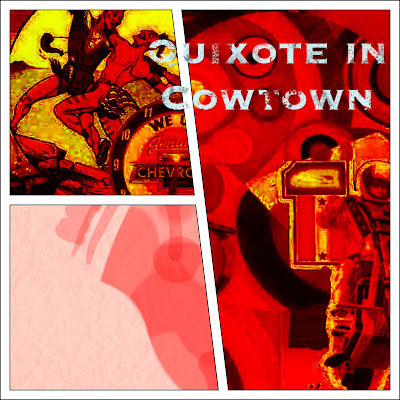 Tonight we'll stay in Texas, but this time I will post a poem from the swing contest, Ed Schelb's "Quixote in Cowtown." 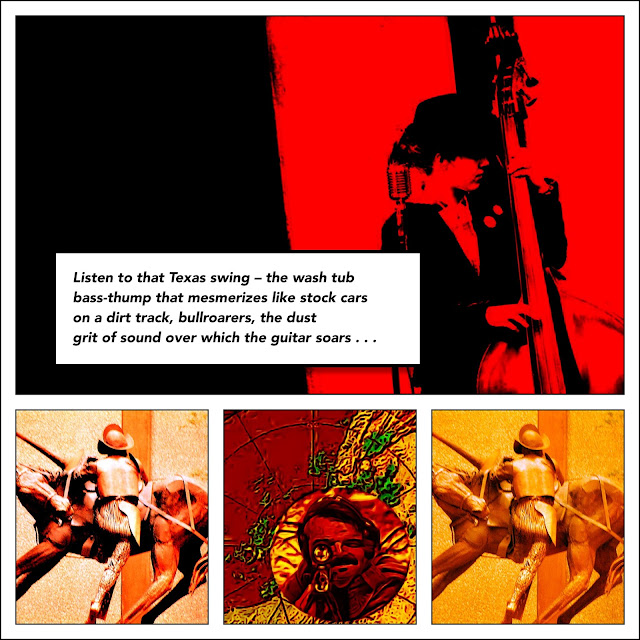 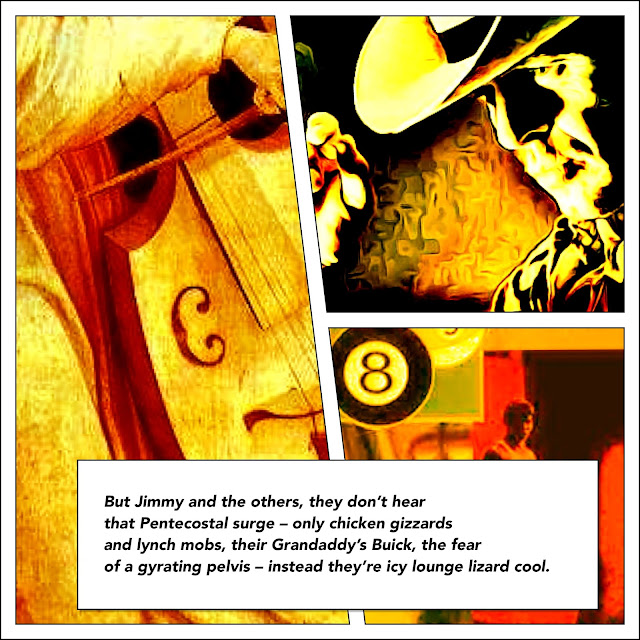 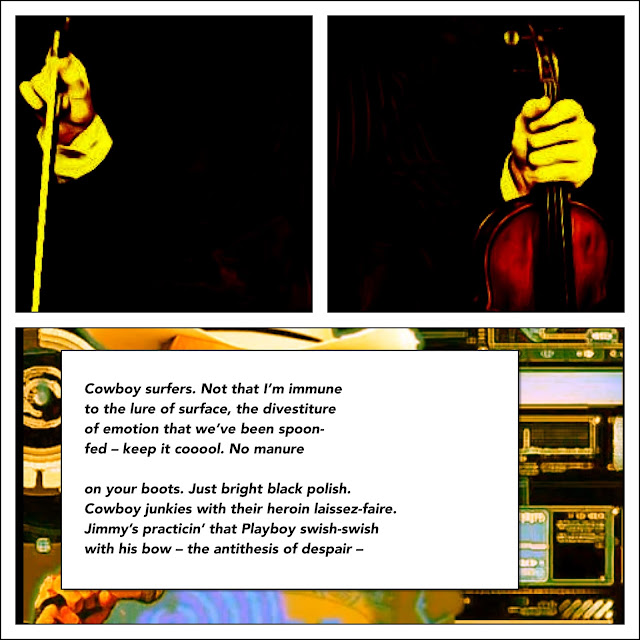 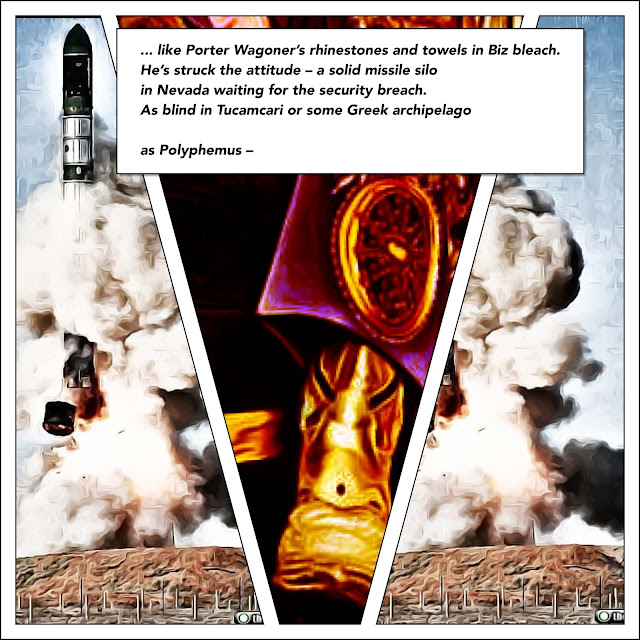 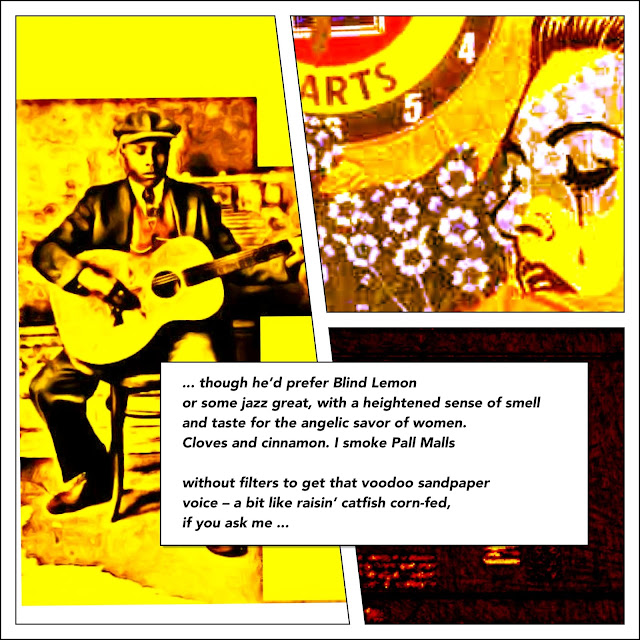 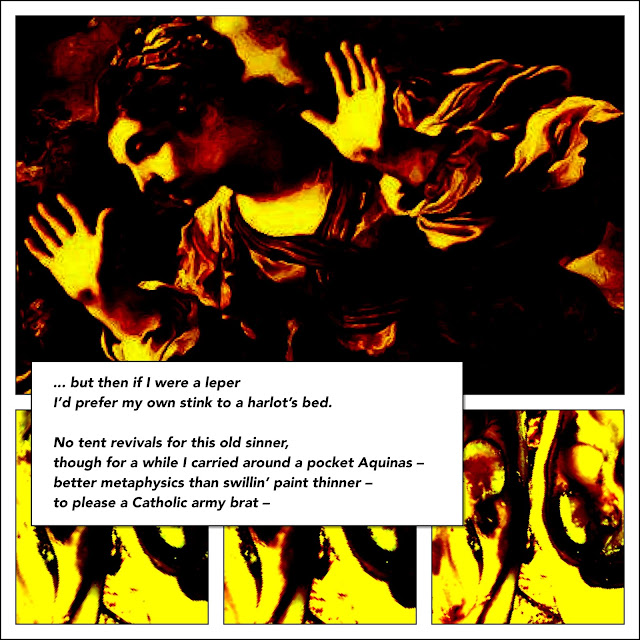 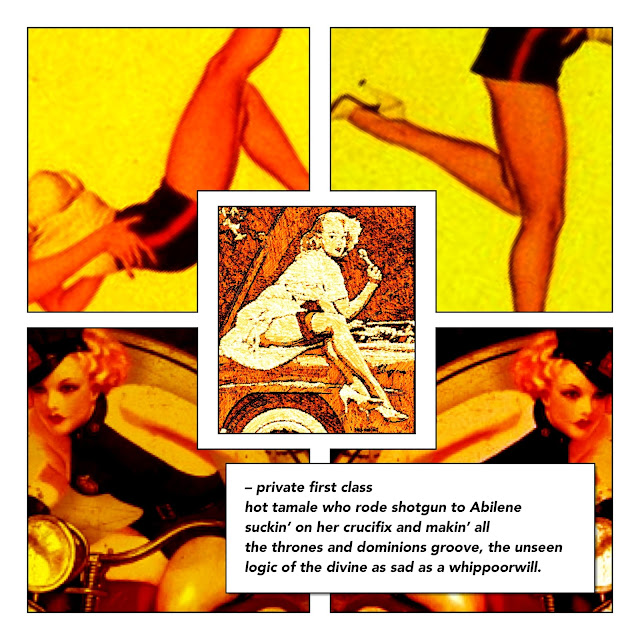 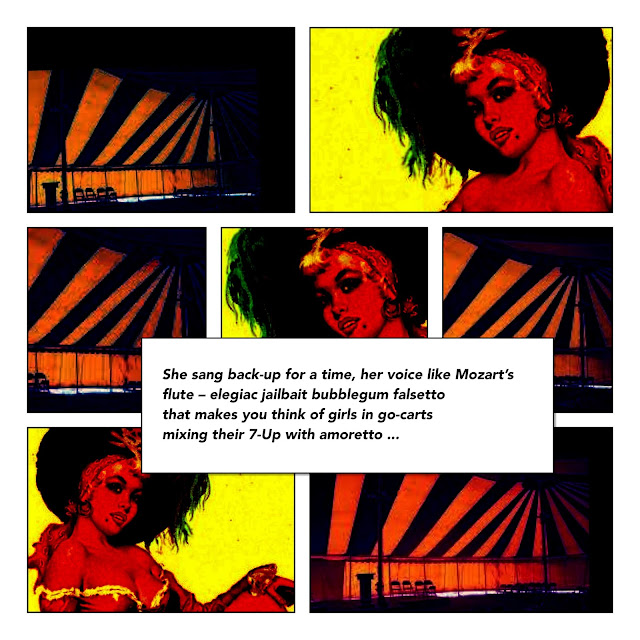 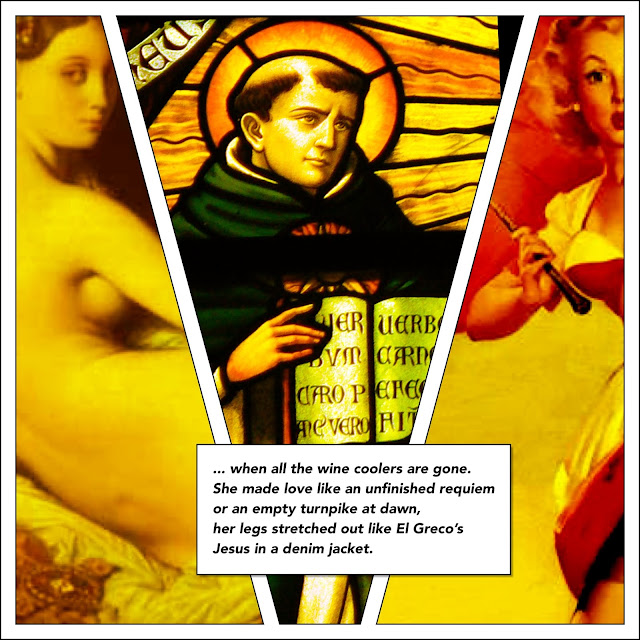 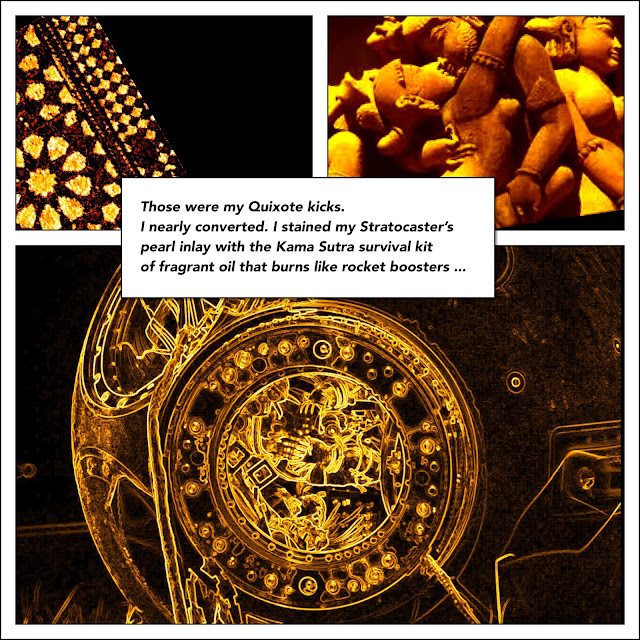 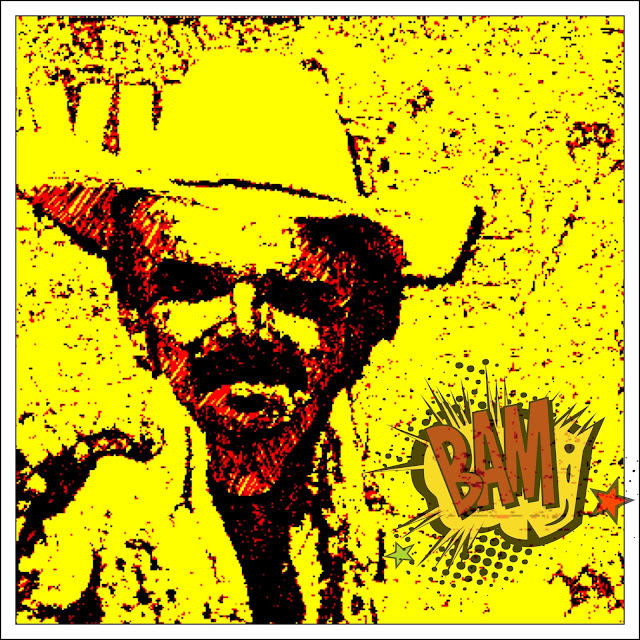 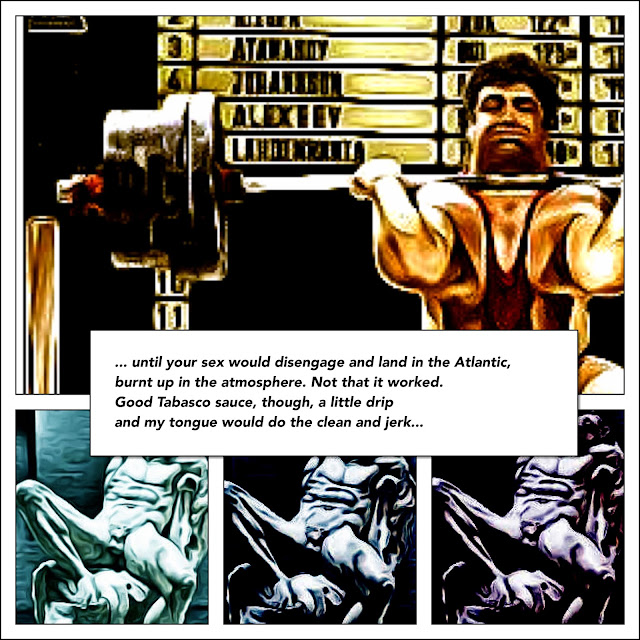 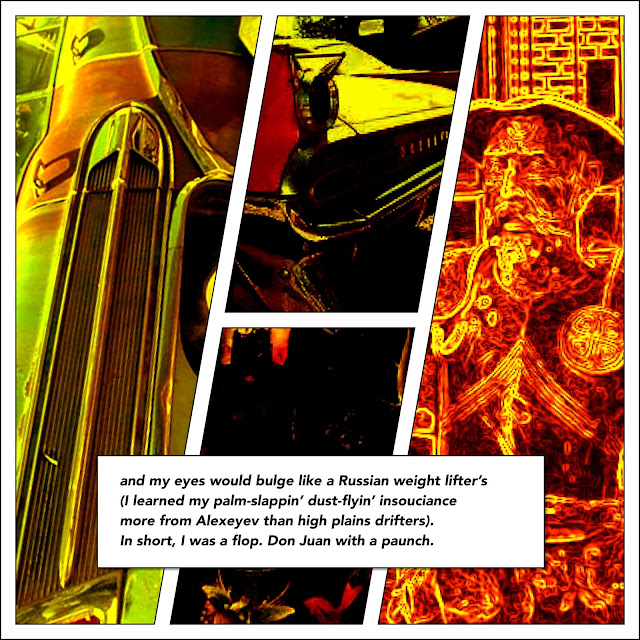 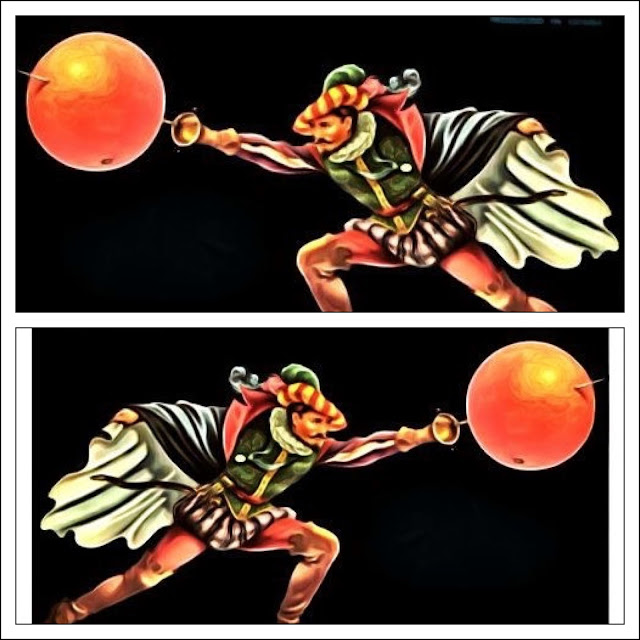 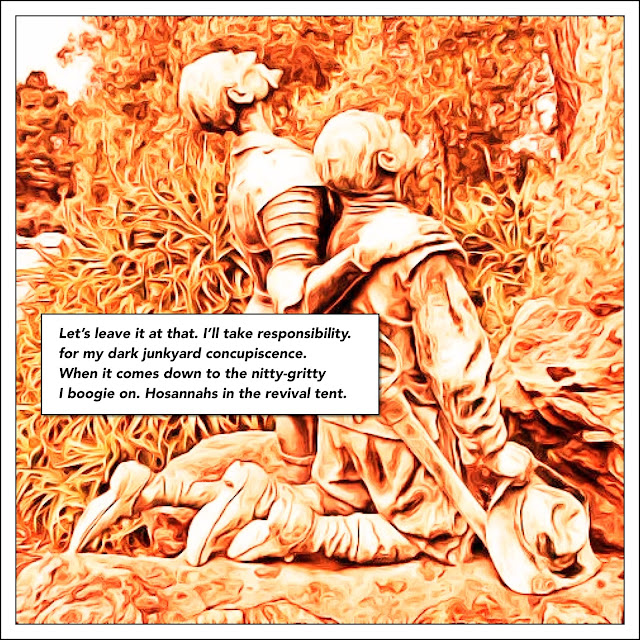 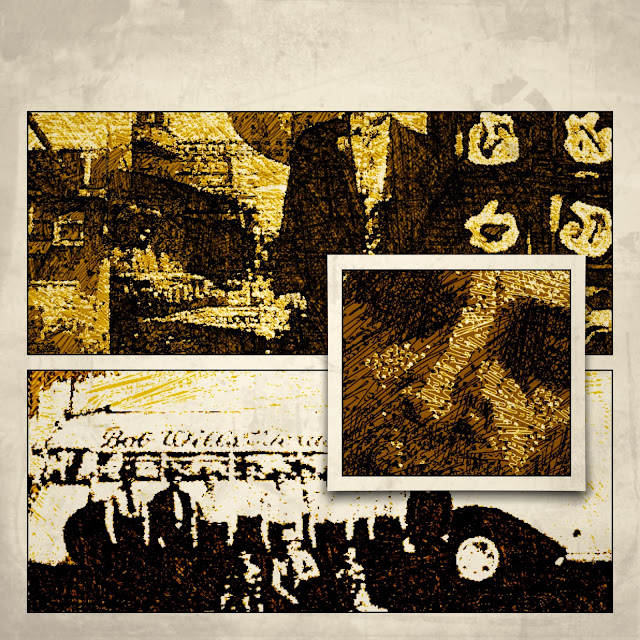 If you'd like the version without the graphics, here it is:

Listen to that Texas swing – the wash tub
bass-thump that mesmerizes like stock cars
on a dirt track, bullroarers, the dust
grit of sound over which the guitar soars

as full of suffering as a field holler,
that thump-thump thump-thump to enslave your feet
while your head finds its release – roller
derby crack the whip to the Promised land, sweet

Jesus! But Jimmy and the others, they don’t hear
that Pentecostal surge – only chicken gizzards
and lynch mobs, their Grandaddy’s Buick, the fear
of a gyrating pelvis – instead they’re icy lounge lizard

cool. Cowboy surfers. Not that I’m immune
to the lure of surface, the divestiture
of emotion that we’ve been spoon-
fed – keep it cooool. No manure

on your boots. Just bright black polish.
Cowboy junkies with their heroin laissez-faire.
Jimmy’s practicin’ that Playboy swish-swish
with his bow – the antithesis of despair –

like Porter Wagoner’s rhinestones and towels in Biz bleach.
He’s struck the attitude – a solid missile silo
in Nevada waiting for the security breach.
As blind in Tucamcari or some Greek archipelago

as Polyphemus – though he’d prefer Blind Lemon
or some jazz great, with a heightened sense of smell
and taste for the angelic savor of women.
Cloves and cinnamon. I smoke Pall Malls

without filters to get that voodoo sandpaper
voice – a bit like raisin’ catfish corn-fed,
if you ask me – but then if I were a leper
I’d prefer my own stink to a harlot’s bed.

No tent revivals for this old sinner,
though for a while I carried around a pocket Aquinas –
better metaphysics than swillin’ paint thinner –
to please a Catholic army brat – private first class

hot tamale who rode shotgun to Abilene
suckin’ on her crucifix and makin’ all
the thrones and dominions groove, the unseen
logic of the divine as sad as a whippoorwill.

She sang back-up for a time, her voice like Mozart’s
flute – elegiac jailbait bubblegum falsetto
that makes you think of girls in go-carts
mixing their 7-Up with amoretto

when all the wine coolers are gone.
She made love like an unfinished requiem
or an empty turnpike at dawn,
her legs stretched out like El Greco’s Jesus in a denim

jacket. Those were my Quixote kicks.
I nearly converted. I stained my Stratocaster’s
pearl inlay with the Kama Sutra survival kit
of fragrant oil that burns like rocket boosters

until your sex would disengage and land in the Atlantic,
burnt up in the atmosphere. Not that it worked.
Good Tabasco sauce, though, a little drip
and my tongue would do the clean and jerk

and my eyes would bulge like a Russian weight lifter’s
(I learned my palm-slappin’ dust-flyin’ insouciance
more from Alexeyev than high plains drifters).
In short, I was a flop. Don Juan with a paunch.

Let’s leave it at that. I’ll take responsibility.
for my dark junkyard concupiscence.
When it comes down to the nitty-gritty
I boogie on. Hosannahs in the revival tent.

And now for the Texas swing!

Next is their "Deep Water": https://www.youtube.com/watch?v=0WSlskCq9Qk