Review of David Churchill's Latest Book -- Poetry and the Concept of Maya: Poems of Alan Britt 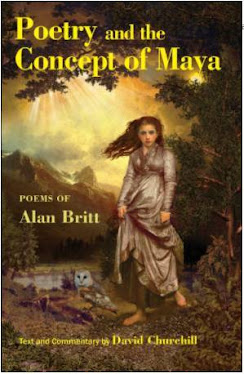 Poetry and the Concept of Maya:

on the poetry of Alan Britt

The Concept of Maya is a push-and-pull tango between two interesting mindsets—fanciful and analytical. When Alan Britt writes about plants in his yard, vines grow along his arm and wind down his finger, curving around his pen until they sprout on the page. David Churchill helps us dissect these leaves until every vein bleeds, using the prism of Maya, which reflects the light of poetry with three rays: one to obscure truth, another to project a world of broken forms, and a third that reveals the radiance of full consciousness and shows us the various levels of reality within the poem.

The poems in Chapter One are chilling in their simplicity and double meanings. On the surface, they appear to depict a suburban backyard, but set during the time of the tower bombings, a rough edge is scorched onto them, as in the poem, “September, 2001”

September leans on a split-rail fence

sail by in a swirling gust of ashes.

In Chapter Two, Churchill reminds us to search out the face of the speaker by finding consistencies from one poem to the next. Nature is a nearly constant theme, but here, Britt branches into poems about love, poetry, music, and delivers more beautiful and thought-provoking imagery as in, “Marrying Myths.”

I married a myth.

in the throat of a gold mine….

one whose kisses resemble rainbirds

Churchill encourages us, in Chapter Three, to experience poetry as a child, seeing everything for the first time. This is never difficult with Britt’s poetry with its imagistic and unique perspectives. Consider his poem, “The Stars.”

The stars are shamans.

in my significant dream

as solid as a wild mustang

The Context of Maya is the kind of book that alters the mind. David Churchill studies the aerodynamics of Alan Britt as he drifts on his helium flight of unexplored concepts of poetry, swooping close to the ground only long enough to pick a flower that is likely to turn into a swarm of blue butterflies forming words in the clouds.

You may purchase this illuminating textbook at Amazon or Pony One Dog Press.

Lately I've been listening to a lot of the Facebook videos from Smalls Jazz Club in New York.  I like that they feature many young musicians or at least some who are new to me.   Here are a few:

This video with the alto saxophonist Plume and drummer Kush Abadey is from before the pandemic: https://www.youtube.com/watch?v=UrrkmQ5Ca-s

Vincent Herring and Eric Alexander's video is not from Smalls, but I thought I'd include it: https://www.youtube.com/watch?v=-fEChBa7rVY

Posted by Marianne Szlyk at 4:29 PM No comments: