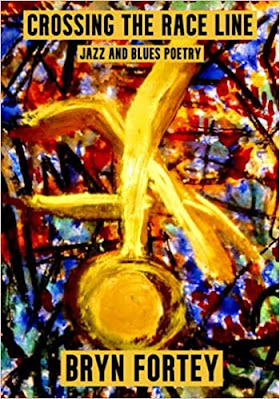 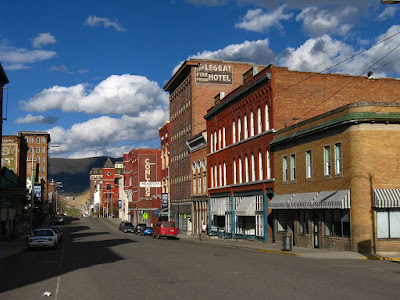 Photo of Uptown Butte by Jasperdo

Tonight, as I bring back The Song Is... for Summer 2021, I'd like to post some new poems by Sharon Waller Knutson.  These poems are part of her tribute to her friend and former co-worker Bob Brown.  The two of them worked together on the Montana Standard, a newspaper based in Butte.  Until recently, they had lost touch with each other, but thanks to the internet, they reconnected, and these poems are the fruit of their renewed friendship. 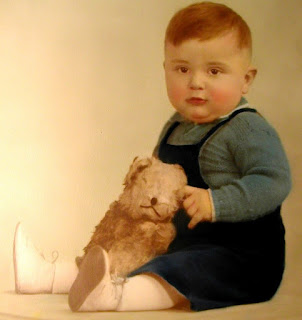 Photo of Bob Brown from his photo album

Although he has the face

their daughters will marry,

in his black jumper

and gray sweater, his body

fattened up by his German

who dote on this first born

of a farmer and a housewife,

shows he is no prima donna.

His eyes are used to the dark

and his nose tells him

something stinks, but he

He thinks it is normal

to live without electricity

and to get hosed off

at the car wash next door

when his father thinks

he smells too bad.

He pays no attention

to the stuffed bear plopped

beside him because he

is fascinated by the flashing

light that bursts out

of the big box on a stick

that makes him blink.

He doesn’t know that

at only a few months old

when he gazes into the lens

he is looking into his future. 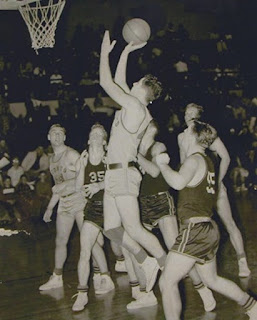 The score is tied

roars across the court

and he steps out

slams into him, pinning

him to the floor. Foul.

The ref blows the whistle

and holds up two fingers

and he shoots the ball,

it soars and sinks the basket

as the crowd cheers

and his team carries him

on their shoulders to celebrate

for the first time in six years

in their cracker box gym.

Snags the trophy for captain

right down to the jock strap,

as snow and slush pile up

four inches deep on the football

field, they trail the other team.

Shiver and you are toast,

the coach shouts. He grits

his teeth and his father

tells him to quit belly aching

and start scoring. So he does.

He makes the touchdown

to win the game in Algoma.

He never misses a Milwaukee-

Braves game on the radio.

Freshman year, he hits a double

to win the game. His heart

breaks when his school

A high jumper in track,

over the high bar

to land in a sawdust pit

soft as feathers when fresh.

Hard as concrete after rain.

His golf coach would rather

play golf than teach it.

He is no Tiger Woods

as he hits and slices

and the ball slides right

past the hole, but he earns

working in the lumberyard

and two factories and editing

the yearbook and his mother

harping on him daily,

Sports stink. Get a fourth job.

Scroll down for more poems and photos 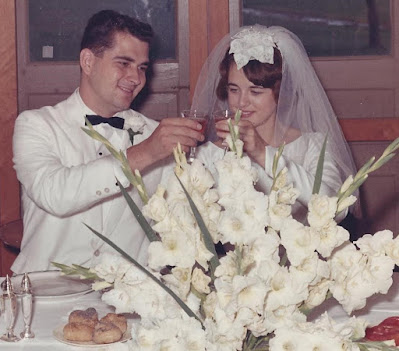 Everything is white except

the croissants on the plate.

Church into a garden.

He even wears a white tuxedo

to match his bride’s organza

gown and both families

toast to the bride and groom.

Knowing this day would come.

But she is just his sister’s

best friend and he the bossy

big brother until his senior year

when he notices she’s all grown up.

But by then there is no time

for romance with college

and a job in Montana. Letters

He is smitten and buys.

a diamond ring and sends

it in the mail with a note,

Will you marry me?

And she calls and shrieks,

Of course, you idiot.

Soon they are on the road

as Alaska and the Antarctic.

But she’s along for the ride

so she snuggles up to him

and turns up the radio. 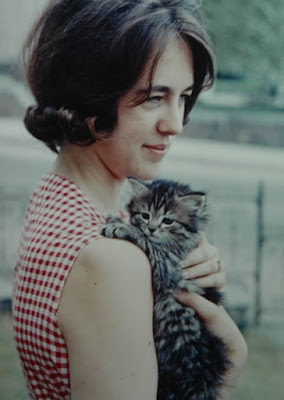 of this copper mining

up the stray off

of its new mama

as both of them

that they have both 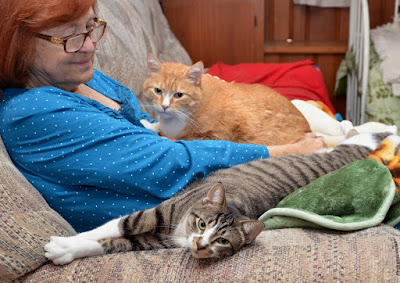 she has been rescuing

will tell you they have

since they rescued her.

They watch her as she sleeps,

stirs the fondue in the pot,

leaves for mass and the Mayo Clinic.

They’re pretty sure they will

watch her until they die and then

she will acquire more watch cats. 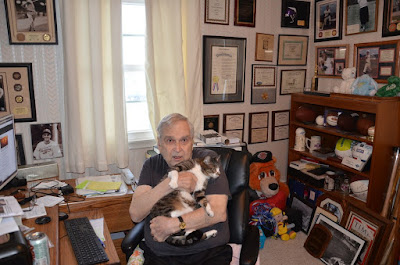 Fileted from stem to stem

he spends most of his time

on the second floor

of the house he has lived

in for five decades, mostly

in his office surrounded

by mementos of the sports

and music life he loves.

As the breeze blows the curtains,

letting in the sunshine, he is startled

by her footsteps, the flash bulbs

so bright even the striped tabby tries

to jump out of his arms,

but he holds on tight

because he knows the road is

going to get even bumpier,

and having lived almost eight decades,

he is prepared for whatever

life throws his way as long as

he has his computer and cats,

and, of course, her for company.

He falls for her in high school

and falls all over her for almost

But he doesn’t fall head

over heels until sprinting

towards his eighth decade

he loses his balance

and their nurse neighbor

out of her sickbed

and finds them sprawled

on the sidewalk, her femur

and his ribs rioting

in the oak tree in their yard. 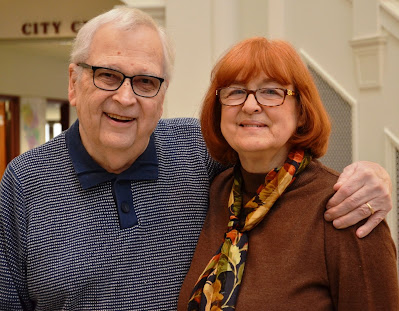 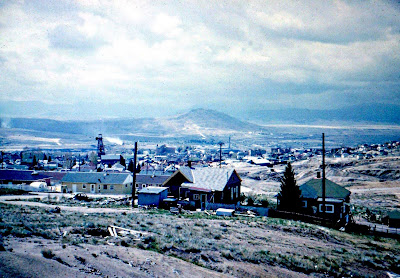 Photo of Butte by Bob Brown

Sharon Waller Knutson is a retired journalist who lives in a wildlife habitat in Arizona. She has published several poetry books including My Grandmother Smokes Chesterfields by Flutter Press and What the Clairvoyant Doesn’t Say and Trials & Tribulations of Sports Bob forthcoming from Kelsay Books. Her work has also appeared in various journals most recently in Spillwords,Trouvaille Review, Muddy River Review, Gleam, a journal for the Cadralor, Verse-Virtual, Your Daily Poem, Red Eft Review and The Song Is…

I hope that you enjoyed this preview of Sharon's new book.  Kelsay Books will publish it in 2022, which is not that long from now!

During the pandemic I've been listening to a number of younger or new to me jazz musicians who perform at Smalls in NYC.  Here is the vibraphonist Sasha Bernstein's "Between the World and Me": https://www.youtube.com/watch?v=V7LUU0sm6HQ

With the other members of her quintet, she plays Warren Wolf's "Grand Central" and her own "Spliced Heart": https://www.youtube.com/watch?v=a1zPHTEN3b4