Welcome the Spring/Summer Contests for 2016! 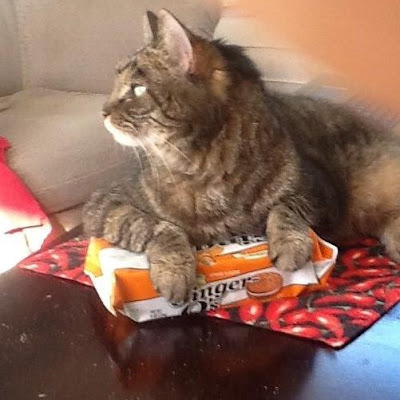 Spring is not the time for Ginger O's although I'm sure that these cookies would make grading papers easier.  Instead, it's time for the spring/summer contests!

I want to encourage you, though, to submit work to these two contests:  poems & flash fiction inspired by Latin/Latino/a culture (thank you, Allyson) and poems & flash fiction inspired by jazz musicians born in the 1920s.  The works submitted to the Latin/Latino/a culture contest may be in translation or in Spanish with translation.  Just be sure that you have the rights to the work whether it is unpublished or previously published.  Some of the jazz musicians born in the 1920s include Miles Davis, John Coltrane, Charlie Parker, Charles Mingus, Oscar Peterson, Sarah Vaughn, Dinah Washington, Ahmad Jamal, and Barry Harris.  The poems and flash fiction need not be about these musicians.  Just listen to their music and write.

Here is some music for both contests.  I'll start with some Latin music.

Years ago my husband and I were amazed by Grupo Cimmaron from Colombia:
https://www.youtube.com/watch?v=vUp9LeZguPM

Let's start with Miles Davis.  Here he is playing with Prince (RIP):
https://www.youtube.com/watch?v=7UoLkFQlmMI

Or you may prefer earlier Miles:
https://www.youtube.com/watch?v=PoPL7BExSQU

I'll finish with some Charlie Parker.  This is "Yardbird Suite":
https://www.youtube.com/watch?v=wyTUvKWGb1M

I'm looking forward to seeing your work!  There will be prizes...and judges, too.

Please send your work to thesongis at gmail dot com .

Congratulations to the Winners of the Fall/Winter Contests! 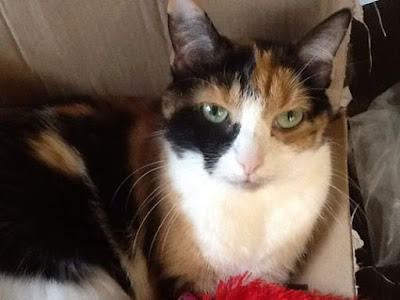 As April speeds past, I think that we can say that winter is gone.  Certainly, spring semester is almost gone.  Tonight I'll take a break from grading papers to post the results of the fall/winter contests.

First, though, I would like to thank Michael Oliver and Catfish McDaris for judging Thelma's Prize (fall and winter), the 1900/1910 contest, and the local poets' contest.  I am honored that you are judging these contests--and thrilled to announce the winners (and honorable mentions).

Let's start with Thelma's Prize (Fall) whose winner Michael selected: poet, editor, and publisher A.J. Huffman for "In the Shadow of Song."  Congratulations!  This poem truly packs a punch.  Michael also singled out Angelee Deodhar's haibun "Xeriscape"  as well as the Scottish poet John McDonald's haibun "MONK (Thelonious that is...)" for praise.   It's wonderful to see the haibun draw more attention.

In the 1900/1910 contest, judged by Michael, the winner was John McDonald's "MONK (Thelonious that is...)." Bea Garth's "Always Too Big" (a poem inspired by Fats Waller) and local poet John MacDonald's "Those Parties We Talk Shit About Monk" received honorable mentions as well.

Each of the poets who submitted poems to the Latin Jazz contest took a distinct approach.  I chose Claudine Nash's "Clean Up" and Felino A. Soriano's "Oh, the joy"  although Allyson Lima's "House Musicians" was a very moving poem that reminds us of what it was like to be a woman in the 1950s.

Among the poems in the local poets' contest Catfish awarded the prize to Alex Conrad for his "Tower of Babble."   Congratulations to my multi-talented former student!  Catfish also praised Will Mayo for his poems "a wisp of smoke," "The Call of the Crow," and "Autumn Mill, 1998" as well as John MacDonald for his "Those Parties We Talk Shit About Monk."

Finally, the winner of Callie's Prize for visual elements is Kerfe Roig.  I especially liked her drawing of Sonny Rollins!

Congratulations to the winners of the fall/winter contests! 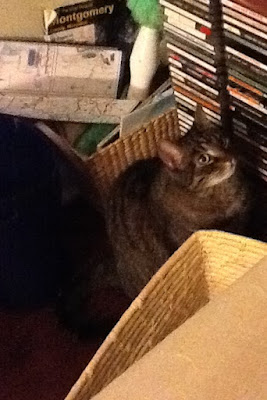 Now Thelma reminds me that I need to post a little music.  I'll start with some Monk.

"Lulu's Back in Town" is a good choice:
https://www.youtube.com/watch?v=9QAYpuTLhVk

I have been listening to Ben Williams lately, so I'll include two of his songs.  The first is *his* version of "Smells Like Teen Spirit."
https://www.youtube.com/watch?v=-8gHjgs_a-I

His "Moontrane" will start us thinking about the spring contests!
https://www.youtube.com/watch?v=Gq_rpYcAVpw

I'd like to pass on Catfish's words of wisdom:

Thanks again for inviting me to judge. All the poets are winners, there are no losers. It takes courage to be a writer and you'll never be lost.
Posted by Marianne Szlyk at 8:38 PM 4 comments:

Sleeping with the Fish by CATFISH MCDARIS!! 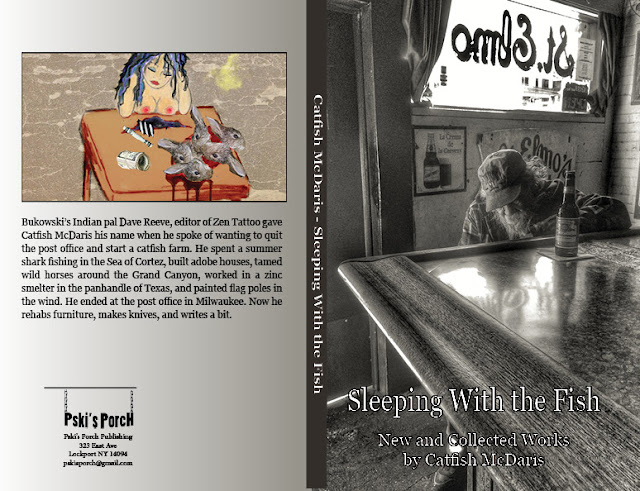 https://midnightlanegalleryii.wordpress.com/
www.amazon.com/Sleeping-With-Fish-Catfish-McDaris/dp/0692671323
Available Now!
Sleeping With the Fish
by Catfish McDaris
ISBN-13: 978-0692671320
ISBN-10: 0692671323
$13
Pski’s Porch has been busy this Spring, and is happy to add another new book of poetry to our catalog, this one from Mssr. Catfish McDaris. Besides being right tasty, Catfish has been loosing his poems and prose on the world for more than 20 years:

Phombies
Cell phone madness was driving the world insane. People walking into things, holding phones up to the side of their heads, blue gadgets stuck in their ears, finger stabbing on tiny keyboards. Folks not speaking to one another, only concerned with electronic communications. Families sitting down for a meal, each and every one of them ignoring each other caught up in their own personal world. Quick warned his daughter to slow down with all her cell phone usage. He explained his theory about phones consuming all human intelligence and conquering the world. Quick’s kid, just shook her head like her old man was hopelessly behind the times. A few days later Quick went to wake his child up, her head was covered by sheets and blankets. When she finally struggled to get up, she had no head. From the neck up was a cell phone. He yelled for his wife and they went berserk, they tried to talk to their kid, but got no response. Quick’s wife sent her a text and it appeared on her face phone. They called an ambulance and reported the incident. They were informed that Phombism was a wide spread virus. There were laboratories and hospitals working on a cure, but all cell phones must be confiscated and destroyed, before a useable vaccine could be developed to treat the Phombies. Quick looked out the window and saw people with cell phone heads stumbling down the street. It was utter chaos, he went to the refrigerator and poured a glass of buttermilk.
*******
We strongly recommend you get some Catfish love before it’s all gone and the sun collapses in on itself. And no, that’s not him on the cover.

Here is some Catfish music for you, too.  The first is Gary Clark, Jr.'s "Catfish Blues":  https://www.youtube.com/watch?v=F8EOQLzgk4o

We also have something by the Catfish Band, an Italian jazz band:
https://www.youtube.com/watch?v=zEVR2RPjX58 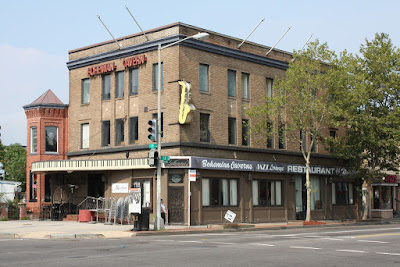 While we're in between fall/winter and spring/summer, I thought I'd post the news that DC's Bohemian Caverns is no more.  My husband and I have fond memories of seeing artists like Ron Carter, Gary Bartz, Barry Harris, and Gerald Clayton there.  It's a shame that this venue is no more.

I thought I'd post my poem set in Bohemian Caverns.  Enjoy!  The poem originally appeared in Felino A. Soriano's Of/with.


Summer Solstice on U Street

Let’s pretend that it’s midnight
as saxophonist Gary Bartz
steps onto the stage.
The room darkens;
candles on the table flicker.
Shadows hide the thickset men at the wall.
The ceiling lowers;
tiny lights strung above stand in for stars.

Imagine moonlight rippling on salt water.
The scent of mango dusted with
chili powder and cinnamon
trickles in with the piano and drums.
We taste fruits we don’t know the names of.

Tap your toes, for sure,
or sway, following the pianist’s lead,
but when the horn starts in again,
carry yourself a little straighter.
Cameras flash.  Wedged in,
we are all caught in the glare.

All too soon imagine
the empty streets above.
Playing the last song, Bartz retreats
into the early morning’s shadows,
the color of his long-tailed jacket,
and climbs the back stairs
to his refuge above the club.

Let's listen to some music, too.

We'll start with the Bohemian Caverns Jazz Orchestra's version of "Alone Together": https://www.youtube.com/watch?v=JEuqKiIR830