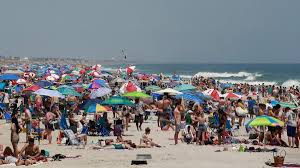 This summer Sandi Leibowitz has joined my poetry group for its workshops even though she lives in NYC.  Isn't Zoom wonderful!  The second poem in this entry is from one of the workshops, by the way.

worse than those islands where walruses

flop to shore to mate and bask,

so many bodies toe to toe

rather than tusk to tusk.

So much bare skin,

all those jeans unzipped,

and nakedest of all,

It makes me shudder,

the thought of all those bodies,

all those mouths breathing

in and out contagion.

If the beach-goers are exhibitionists

I am a tortoise,

within the shell of my apartment.

Even indoors, my white skin’s

At three p.m., from my window wafts

the sound of someone honoring