This evening I would like to return to haibun with India's Pranav Kodial and, of course, Angelee Deodhar.  The images with Pranav's haibun are by Angelee.

Has it been a while?  It seems like a while!

I stumble across my semi dark room, fumbling frantically for the light switch. I notice a rectangular shape on the wall and having switched it on, relax. They say events may trigger but don't actually cause depression. They say chemical imbalances in the brain may cause depression, maybe it's genetic, it’s because of lack of sunlight.
They say maybe—

closed door...
is there light
on the other side? 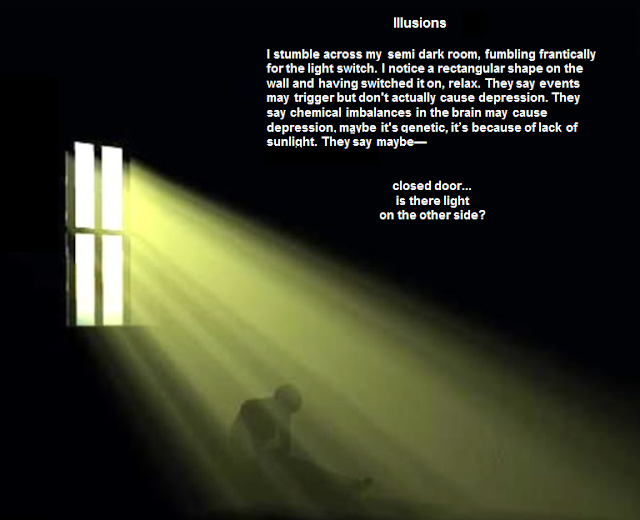 Ten. Hundred. Thousand. He moves through the sea of people, laughing, shaking hands, exchanging hugs and pleasantries. Finally he reaches the door. I watch him. And smile. Then I watch him. And cry. Once him. Once him…

from a mound of rice  the black grain tumbles  away 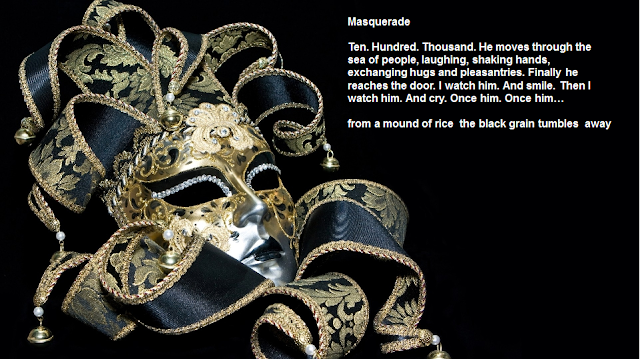 Bio : Dr. Pranav Kodial is an Indian ophthalmologist with a love for the Arts. In addition to haiku and other forms of poetry, he writes short stories and has recently completed a novel. He has also written and acted in plays, and sung in light classical music programs. He lives with his anesthesiologist wife and two children in Dahanu, Maharashtra.

For those of us in the US, Thanksgiving is coming.  Angelee Deodhar just sent me a haibun for that holiday.

November 26th is a special day for two lucky turkeys who get to meet POTUS at a special ceremony held at the Rose Garden of the White House where they are “officially pardoned” and do not end up on the Thanksgiving table.

The turkeys live a spoiled life style and are kept in a special pen. The radio is played for them all day long. They listen to Vivaldi and John Mayer intermittently. Once they arrive in Washington they are put up in the Willard Hotel, and meet the press before being taken to the White House.

Afterwards they live the rest of their short lives at the historic Virginia residence, Morven Park .

The official "pardoning" of presidential turkeys probably started with President Lincoln's 1863 clemency to a turkey ,when “a live turkey had been brought home for the Christmas dinner, but Lincoln’s son ,Tad interceded in behalf of its life … and the turkey’s life was spared.”

Angelee sent me some music for this haibun to give you an idea of what the reprieved turkeys were listening to.

Here is his "Sunrise in Beijing": https://www.youtube.com/watch?v=L1JnHCqqu64&list=PLvHp5Whq92_YqeIYWt3MUmATXW07wOAia

Next is his "Tantric": https://www.youtube.com/watch?v=siFD3ZJsYpM&list=PLvHp5Whq92_YqeIYWt3MUmATXW07wOAia

I'll finish off with one of CSaA's political pieces:  https://www.youtube.com/watch?v=TnnoVHEI-xA&list=PLvHp5Whq92_YqeIYWt3MUmATXW07wOAia
Posted by Marianne Szlyk at 8:28 PM