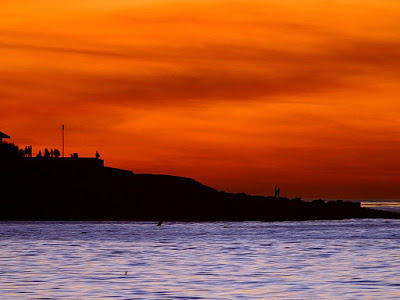 We may not be done with winter yet (although I did see some purple crocuses poking up in my neighbors' yards), but the fall/winter poems are drawing to a close.  Enjoy poet-activist-psychologist Claudine Nash's riff on the color orange!  As Claudine notes, this poem "was inspired...by Dean Martin's version of Pablo Beltran Ruiz' Latin song "Sway" (or "Quien sera?" as it was known in the original Spanish version)."

for alarm or urgent
care;  as unpleasant as
it is, I’m told fatality is a

seldom occurring event.
A drop of marigold escapes
me when I group

a bouquet of seasonal
leaves. Another seeps
from my wrist after an

article on waning
solar storms. Chance
images of you bathed

in black and white are
always good for a minor
saffron-infused spill. But

drips from the overhead
and I hemorrhage
a sunset.

Originally published in  The Westchester Review

Claudine Nash’s collections include The Problem with Loving Ghosts  (Finishing Line Press, 2014) and Parts per Trillion (Aldrich Press, forthcoming).  Her poems have won prizes from the Avalon Literary Review, Eye on Life Magazine  and have appeared in numerous publications including Cloudbank, Asimov’s Science Fiction, Haight Ashbury Literary Journal and The Westchester Review. She is the submissions editor at SolarNation, an organization that utilizes art and writing to draw consciousness to climate change. She also has a Ph.D. in Clinical Psychology and is a practicing psychologist.Websites: www.claudinenashpoetry.com          www.solarnation.com

Next I'd like to post a new poem by Alex Conrad.  You may remember his poems from last summer: http://thesongis.blogspot.com/2015/08/poems-by-alex-conrad.html  It is wonderful to see how his poetry is evolving.

Tower of Babble
By Alex Conrad

In the sky
There is a house
Within which weathers while the wind blows
A young child holding a serpent.

The serpent whispers holistically to the child
About the wonders of the world.
That city on a hill
Is hidden poorly.

The earth shall be ridded
Of the wretched souls
Who believe they are better than thee
But are clearly not.

When will the people realize
That they are not here
For the rest of their lives
But are obviously headed somewhere else.

A beautiful city,
Not of bricks and stones,
But of men standing around
Looking at the sky.

Let's finish up with a little music.  Of course, I have to include "Sway," the Dean Martin song that Claudine mentions:

I'm going to include a little Frank Sinatra, too.  "The Way You Look Tonight":
https://www.youtube.com/watch?v=h9ZGKALMMuc

Charles Mingus and his Quintet play "Orange Was The Color of Her Dress, Then Blue Silk":  https://www.youtube.com/watch?v=TNlQ0lrIEMs
Posted by Marianne Szlyk at 4:27 PM