A Tribute to Felino A. Soriano 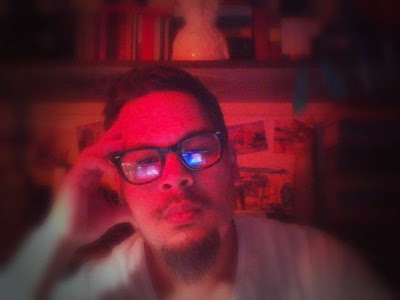 Recently Heath Brougher, the poetry editor of Five2One Magazine, gave me the idea to set up a tribute to Felino A. Soriano, a dynamic and prolific jazz-inspired poet.  You've seen a fair number of his poems at this blog-zine.  Tonight I thought I'd bring them together for this tribute, starting with "Of This Momentum Song (Forty-two)," a piece written especially for The Song Is and nominated for the 2015/6 Best of the Net.


Of this Momentum Song (forty-two)

To be near ________,
is what
here needs it
to be, an unnamed
name is only
________ when
the
mouth closes, excavating
rhythm in all
language, when
then here is again
and why we ________
is
answered atop
a silence of small
stone: the flecks
within the reflect
hold the hand
of what watches,
how or when
the
breath of our going,
_________.  We come
to drink of/from.  The
promise held to
how we name the
unnamed.  Paused
intuition, we’ve a
nuance in our
motivated ________,
a
freeing fathom can
reinvent the mouth.

Organized, we hour by
the sound of it, sound-
ing out to open
doors
in incremental minutes.
Certain these angles
plagiarize shape,
_______
is familiar,
is

known then replaced
into what finds

a self-outside
the self, privileged,

Since this will be a long entry, I am going to post one song after each poem or set of poems.  Here is Miles Davis' "In a Silent Way/It's About That Time":  https://www.youtube.com/watch?v=E9X7XmigDxw  Interestingly, you don't hear Miles' trumpet until about four minutes in.

"Underneath," a tribute to Vijay Iyer, was nominated for the 2014/5 Best of Net.  It is also part of Felino's Forms migrating series.

Underneath
I want to live, experiment with focuses, rearrange fragmentations.
Create alternate apparitions, converse across patterned puddles
attempting silent art into an acclimation of open structure.  I’d
live then, if each year didn’t curtail with predetermined fallacies of
bruised resolutions.  I listen, then; the perfect option among voices
hitching and holding onto stories delving, if by thrown, and the sequencing
of truth singing and louder, singing into the dark halls of my eyes’ misplaced
confidence.

Vijay Iyer also inspired "Morning, this," a poem where you see Felino's love for his daughter.

Felino has paid tribute to a number of different musicians, often drawing attention to lesser-known contemporary men and women as well as highlighting the classic figures.  The first poem I received from him was "toward smile and its fundamental creation/for Takuya Kuroda."  Blue Note Records describes Kuroda as a "forward-thinking musician with a bent towards mixing post-bop and adventurous soul jazz."  I would also call Felino a forward-thinking poet with a bent towards mixing jazz and adventurous poetry.

toward smile and its fundamental creation

The next poem "introverted dance and its electronic configurations/for Kris Bowers" draws our attention to another emerging musician.

The next set of poems that Felino sent me included one honoring the innovative pianist Robert Glasper.

in this piano-glare fade from

configured in the approbation
of legacy and brilliant’s articulating

Glasper also appears in the poem that opened my Thelonious Monk contest.

Christian Scott (whom you may know as Christian aTunde Adjuah) is the inspiration for the next poem:

glare toward a nascent tomorrow enunciation

expressed against relevance of another’s role as typical

& what extrapolates
they’ve an aim-off agenda

As I mentioned above, Felino has also celebrated the work of more established musicians.  One is Charlie Haden, the double-bassist and leader of the Liberation Music Orchestra.

vibratory nuances in the celebrated fathoms of music

all aspects of a life’s inward collaboration

both or other tools design space as architecture,
body & becoming as

respell elation
from a silent theory

toward screams of physical alterations

the need to define this moment’s
clarity
answering through haze & form of fogged
interpretations,

sound oh, sound
which whisper first
exposes the forehead
to lean and prosper
walking into halls of
nuanced & radial
associations?

—then, & when
the answer rises from the tongue of sole communication

Each crow suspends prior to dedicating movement

a prose writes
its wandering purpose

pound of memorizing measure, the associated

paralleling music with the flight of handmade veneration—

the tribute will arrive again, ongoing

mentioning toward the hearers of tonal

Enjoy this tribute to Poncho Sanchez!

I especially appreciate "Listening," one of the poems in the Summer 2015 contest of poems inspired by female musicians.  The musician honored here is pianist Geri Allen.

My writing stems from the perspective of positing a poetic language of immanent discovery.  Often, the burden of everyday language—one offering a sameness and lack of creative spontaneity—creates spectral desensitization toward environment and the paradigms of interrogating what expands into beautiful presentations.  I am first, an interpreter of what surrounds me; music is foundational, and the found rhythms inspire and dictate each poem’s identity and spatial configuration.  I am interested in language as longevity, in advocating for its limitless disposition toward revealing, —and in this revealing, I aim to uncover/unconceal angles of what is unseen, the belly of a stone’s cool and undisturbed silence.

Jazz works its way into my language, —through rhythm and interpretation, its spontaneous and improvisational qualities augments my desire to create a text that behaves from the perspective of unaltered fruition.

I wish Felino all the best and thank him for his past & future contributions to The Song Is... and, more importantly, poetry itself.  I don't know how he does all that he does!
Posted by Marianne Szlyk at 7:00 PM