This evening I'd like to post some words and images that my former student Alex Conrad has sent me.  Both are well worth pondering on a Friday evening.  Alex's images are the first two, the ones with captions.  The other three come from Google Images.

Why is it so many are free
Only in the darkness of night?

Broken, scattered, scathingly scarred
Seeping sadness slowly suddenly stops
Upon one image.
Anybody can be anybody under the guise of nighttime.

But the ugly, the decrepit, the evils
Also come out to play
Dans le noir de nuit…

They clutch at heartstrings,
Playing the music only they know
How to play and we know we sing.

Under the cover of night,
Witches can be beautiful…
Manipulators can be loving…
The spiteful can be caring…
The soul-less can be soul-ful…

You have never known pure adrenaline
Until you have stared at the underbelly of Satan.
He maniacally masters many men
Making monstrous masks rambling through the days.

Life is never black and white.
La vie n’est pas rien le noir ou le blanc.
There will always be a gray area.
It is within that area that many monsters roam.

Everyone has secrets
We all have façades we are terrified people will see through
But the whispering weeping willow knows everything we hide.
From our darkest depths of our lies
From the flakiness of the epidermis
To the roots of our sinister sins seeping slowly into fruition.

From rain-soaked windows,
We stare upon the wonders she does.
We believe she's there to protect us
But she's really just listening to the screaming of our soul.

Word spreads like the wind
Even the smallest of creatures know that which we fear.
Loss,
Loneliness,
Uselessness,
But above all, death.

Why do you think her branches wipe the dirt away from the ground?
She's just preparing our burial grounds.
She knows she'll always win.
Wickedly twisted she waves holistically
watching us wither away. 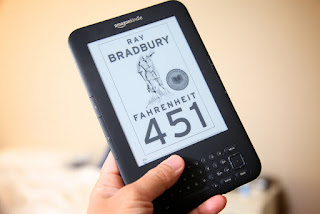 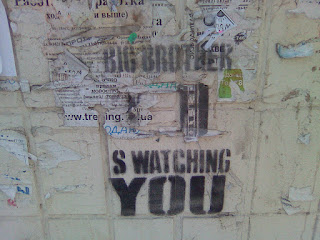 Blue screens are all the craze.
Books get figuratively burned by Kindle Fire.
It's odd to see someone walking down the street,
Especially with the fear of the Hound,
Lurking around every corner on every different form.

Big Brother smiles down
Upon the madness that has happened within this Animal Farm.
It seems like 1984 is not just another number.
The literal hanging of innocents,
Stepping to the side to avoid figurative rain-washed puddles.
But as I sit here sipping my milk-filled cup of tea,
I wonder how is it that two men from different lives,
Different walks of life,
Had a predisposed knack of writing warnings.

Look in the window at poor Montag’s
Holding onto dear Clarisse’s.
The poor work-horses of the rebellion,
Worked to death by a dream of a few.

See the Chief Beatty’s of the world
Destroy knowledge for the sake of their image.

If all goes to hell in a handbasket,
Let me go as the old woman seen as a nut did,
Surrounded by the sanctity of literary freedoms.

Now it's time for some music.  Toshiko Ayikoshi is another jazz musician born in the 1920s.  Formerly she led a big band that performed every Monday night at Birdland, and she has also performed as a pianist.  She is currently based in New York City.  Let's start with her "Memory":

This performance of "Autumn Sea" is fairly recent (2014):
https://www.youtube.com/watch?v=ioCrF63Scls

"The Village" is a solo piece:
https://www.youtube.com/watch?v=X0t8WSu6Tcc
Posted by Marianne Szlyk at 4:33 PM