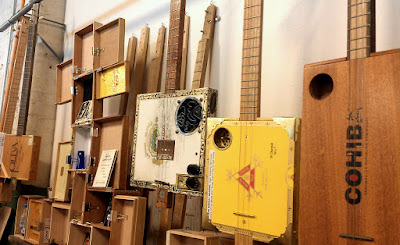 The British jazz poet Bryn Fortey reminds us how many musicians were born in the 1920s. Above is a picture of some cigar box guitars, the instrument that the subject of Bryn's poem was known for playing.

Ellas McDaniel would have laughed
At being lumped with the jazzers
He thought himself a rock ‘n’ roller
An entertainer
The man who invented rap
And the psychedelic guitar
The baddest cat alive: Bo Diddley
Rock ‘n’ roll – certainly
R&B – yes
But rooted in the Blues
(And where would Jazz be without them)
With a nod to the field hollers
That preceded it all
Ellas McDaniel: the boy violinist
Who tuned a guitar like a fiddle
And grew up to be Bo Diddley 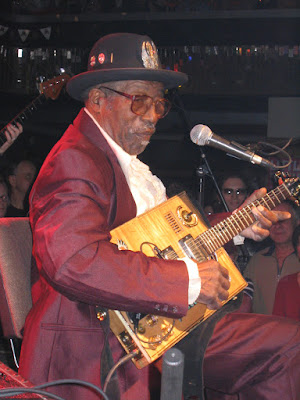 Nina Simone was not born in the 1920s, but recently I found a wonderful poem inspired by her "Blackbird." Holly Holt, the co-editor of Walking is Still Honest and the illustrator of Charles Clifford Brooks III's Athena Departs and The Salvation of Cowboy Blue Crawford, has written this poem. 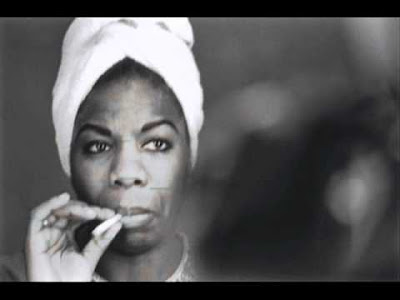 you believed happiness
was the language
the birds spoke
in summer, where heat
mimicked the pulse
of memory
while your ears
gathered the silk
of silence over your soul

we were both born
in stardust, you and I,
but something lonely
crept into you
from the cradle:
an inability to chase
dreams and horizons,
to light candles,
to breathe hopes
and call them home

words, like a pebbled walkway
on days filled with rain,
have contradicted your peace
as the hushed sound of stone
underfoot—a heart’s beat,
sad, alone, and afraid,
muted by this hopeful season
every year, your search
involves only looking back

your beliefs bring the certainty
that happiness betrayed you,
the blackbird whose sad beauty
will never again grace the skies—
and summer can only move on

I also want to add Holly's illustration of a haiku in Miriam Sagan and Michael G. Smith's sequence. 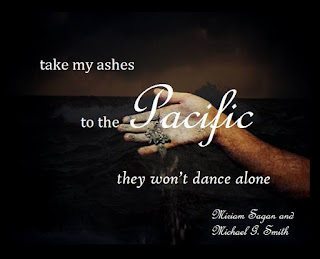 Let's start off with the video of "Blackbird" that Holly sent me:  https://www.youtube.com/watch?v=8CBIuyH7eKA

Nina Simone also sang "Don't Let Me Be Misunderstood" and "To Love Somebody" (among other songs):  https://www.youtube.com/watch?v=9ckv6-yhnIY

Here he plays "Who Do You Love" with Ron Wood:
https://www.youtube.com/watch?v=dqiHRYjePBk

Or you might prefer him with George Thorogood:
https://www.youtube.com/watch?v=oXMgx92muQo

Posted by Marianne Szlyk at 7:01 PM