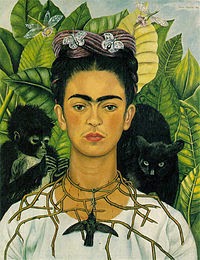 I'd like to post some new poems.  First are four that Catfish McDaris sent me for the mourning and memory contest that just ended.

Along with all my
worldly possessions
I would do it gladly

My only child
light of my life
I beg you I need
you I beseech you.

While Quick listens to Norwegian Wood
wondering about John Lennon building a
fire, his daughter left him a tiny circus box
full of tasty bears, lions, and elephants.

She'd loved her fifteen year
old son to no avail, he was
unhappy with living

She tried therapy, medication,
bribery nothing worked, she
found him hanging from an
apple tree in their backyard

Donating his organs seemed
ghoulish but she did it, a dying
man in Ohio received his heart

They exchanged Christmas
cards for fifteen years, until
his death, he lived long enough
to enjoy his wife and growing family

A few months after the man's
death, she got an official legal
notarized letter with a check
for $2.55, for the heart.

Voices from all over
earth come through a little
radio, 35 people dead in
Jerusalem, so far.

Fog rolls in over Scotland,
elections coming in England,
devolution in a fortnight.

Building collapses, crashing
onto a wedding in the City of
David, dead being dug out.

What a world, I sit in the
basement and cry in wonder
and ask God why. 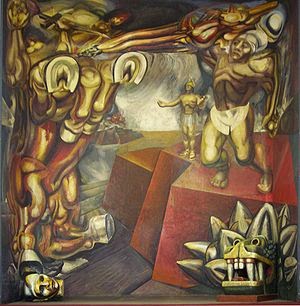 Bea Garth also sent me a powerful poem about her late nephew Robert.  He had been shot by the police.  The painting above is part of David Alfaro Siqueiros' mural in Tecpan.  Siqueiros' La Marcha de la Humanidad is below.

He was my nephew shot by the police
that year, the day before my birthday.
Two months later I visited his hang out in Blue Lake,
murals painted under the bridge next to his mother’s land.
He carried a pole from a rake,
tried to get the vagrant to leave.

The police came
and shot my nephew dead
there by the bridge
on the edge of his mother’s land,
shot dead for carrying a pole
and waving it at that man,
the vagrant with a cell phone,
the vagrant who looked less vagrant than he,
my nephew with his long greasy hair
and old smelly clothes,
he and his mother almost never washed,
my nephew, son  of my brother,
the Libertarian Hippy protecting his land and way of life
with his own odd constructions a few miles away.

My nephew never said much,
he just wanted to become an artist
and was: murals under the bridge—
a woman and her dog,
protests against the police,
now flowers in a glass jar next to the bridge.

My nephew now lies in an unmarked grave
under a redwood tree
buried by his father,
his grave now graced by stolen flowers
and a garland of magical weeds.

My nephew shot by the police
buried by his father
who showed me his grave
while  he and his girlfriend’s  dogs barked and peed.

My  nephew: twenty seven years old,
never said much,
just wanted to paint murals
and protect his mother’s land
from the hobos and the police.

I'm adding their "Place in the Country" as well: https://www.youtube.com/watch?v=rGWsrWi8OxY

All of the Mexican art makes me want to post more Los Lobos:https://www.youtube.com/watch?v=t57_Lk38iEE

I'm closing with Richard Thompson's "I Misunderstood" although it is more emotional than political:
https://www.youtube.com/watch?v=te4YKjLJPro&spfreload=1

I don't want to be up past one am again tonight.

Posted by Marianne Szlyk at 9:30 PM