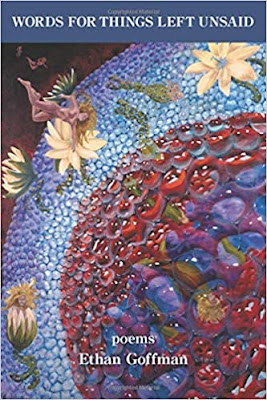 From time to time, I publish reviews of poetry books to draw attention to the good work that poets are doing.  Tonight is one of these times.

Ethan Goffman’s debut collection contains multitudes. His poems address the concerns of the human heart as well as the concerns of the planet we share with other living creatures. Goffman sometimes uses blunt, uncompromising language to convey his angst over a world which seems to have gone terribly awry. referencing the myth of Eve’s primal temptation in his opening poem, Goffman writes “ This bite of apple / this flight too close to the sun ... will be our doom.”

But Goffman’s vision is not entirely clouded with gloom; his voice can ring light with laughter and tremble with tenderness.  In the sequence “The Book of Thelma”, he imagines his household cat as an incarnation of Vishnu, steps back to marvel at his own fragile sense of triumph at managing to corral his pet and stuff  her “squirming body / into the cat carrier ... I / Judas Iscariot Goffman ....” In another poem in this cycle, he mourns the roadside death of a cat resembling his beloved Thelma” “In life you had been /  sleek and black / a fleeting shadow / glimpsed from the window”, then takes the living feline, Thelma, in his arms — “her purring shakes the air, shakes my heart”.

This poet brings a sardonic light ever to ear on the foibles and pretensions of human animals, himself included in that number. “I am an embarrassment to myself,” he confesses, explaining “I am the guy in the red shirt in every episode of Star Trek / who dies in the first scene or two”.  But look past the self-effacement; there is a sweet reverence for life underlying this poet’s work. The brevity of human existence plays out against a broad cosmic backdrop as Goffman rests on a futon couch “in this small room we had built / for the child we never had”.

Open this book and prepare to walk precarious paths beneath a panoply of stars.

If you would like to review a book for The Song Is...especially recent books by Bill Cushing, Ann Christine Tabaka, Catfish McDaris, Ryan Quinn Flanagan, Ahmad Al-khatat, Bryn Fortey, Will Mayo, and others, please drop me a line at thesongis at gmail dot com.   Thanks! 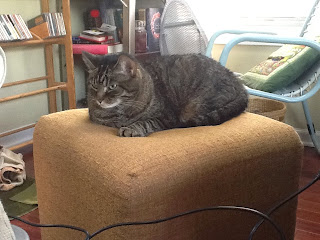 Now let me play some music for you.

Here Jason plays drums while his brother Delfeayo plays trombone on "What a Wonderful World": https://www.youtube.com/watch?v=xN--yTnS45Q