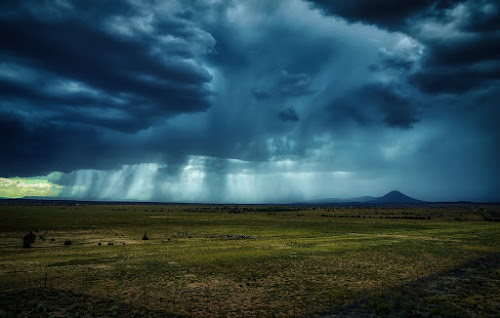 Recently, through the poetry community Verse-Virtual, I met the Arizona poet Sharon Waller Knutson. We have been corresponding about poetry and a few other things.  Tonight I'd like to post a few of her poems for you to enjoy.

Cow crooner he calls me

as I warble Willie and Waylon

from my lightning lit living room

as thunder trumpets and throbs

in a rambling rustlers’ rain

Originally published in Your Daily Poem. 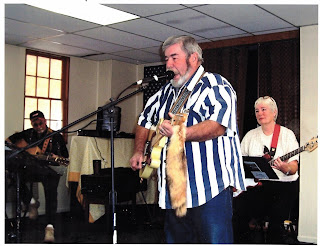 At the café, the gray hair musician

in the bushy beard and mustache,

plays the guitar with his fingers

and the drums with his feet.

After five decades of performing

in bars, cafes and trailer parks,

he still knows how to draw a crowd.

He belts out Elvis, Johnny Cash

in a deep growly voice. As his fingers

from the guitar, swings to the beat.

He jokes that he only knows three songs

and he sings them frontwards

and backwards and he just bought

his guitar at the pawn shop.

The crowd dances, claps and laughs

although they’ve heard them all before

as they drink their beer and wine

and eat their steaks and fish and chips. 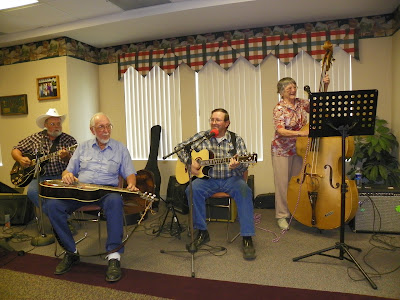 In memory of Wanda and Gene

In his white goatee and suspenders,

the room and sets it afire.

She looks tiny and quiet

next to the loud giant bass

until her big voice fills the room.

Tired of traveling the country

settle in a double wide at the foot

of the Superstitions, where valley

and down Jell-O shooters.

Even after the move to assisted living

they perform with friends

in the rec hall and at a local bar

When she loses her breath

and he his memory,

they hang up their instruments,

to music they made together.

After he is gone, she sips a martini

at the local café, taps her feet

to the rhythm as she listens

to her favorite country band.