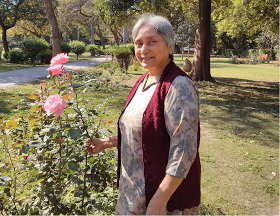 Recently I learned that poet and editor Dr. Angelee Deodhar had died suddenly.  Since she was not only vital to the world of haiku and haibun (a hybrid of prose and haiku) but also important to this blog-zine and my own poetry, I would like to post a tribute to Angelee and her work, including the visuals that she so freely shared.   Enjoy!

I'd like to start with a collaboration between Angelee and the American poet Thomas Canull:

Haibun :The echo
A collaborative haibun by Thomas Canull (USA) and Angelee Deodhar(India)
new grass--
a sparrow and I
just playing
-Issa
Mother's Day brings back fond memories of my grandmother whom I loved dearly as she and an aunt just 8 years old at the time raised me for at least the first year of my life. My birth mother rejected me at birth as she already had one child to care for. And no one on that side of the family would ever discuss it or tell me how long I was at grandmothers but she was always there for me as I grew up. Some summers I would to stay there for the summer and for me that was a taste of heaven.night watch-green hills flattenon the monitorTotal number of words 123Issa haiku 1808 from David  Lanoue’s site http://haikuguy.com/issa/search.php?keywords=sparrowBio:Thomas Canull  worked for several years as an intel-op in the far and middle east. While in Japan he fell in love with  haiku. Several of his haiku have appeared in the Japanese online Asahi Haikuist Network.While in Arizona Thomas started posting a "Thought for the week" and a "Haiku for the week" at his neighborhood Starbucks. When he returned to Indiana ,he brought the idea back with him and has been posting at the same Starbucks for several years.Thomas is also a Co-Founder of Hope 4 U Bracelet Ministries which is dedicated to uplifting of everyone he meets with a message of love and hope.

I would also like to include some of Angelee's own haibun and haiku sequences. 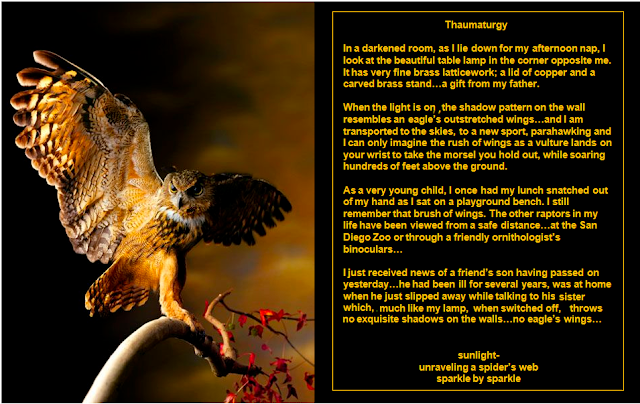 She gives a definition for "Thaumaturgy" here: Note :Thaumaturgy is the capability of a magician or a saint
to work magic or miracles. Isaac Bonewits defined
thaumaturgy as "The use of magic for nonreligious purposes; the art and science of 'wonder working;' using magic to actually change things in the physical world."[1] It is sometimes translated into English as wonderworking.

pail in hand
I trace the muddy path
of childhood mushrooms

in the twilight
against dusky bougainvillea
the white wall whiter

Japanese dance
in her fan
the changing seasons

glowing pumpkins
through the windows
a Halloween moon

moonless night —
from the harvested field
the hoot of an owl

autumn scrapbook—
I color in the leaves
with crayon stubs

I'll finish with a visual that Angelee had made of my poetry.  This was the last one that she sent me, I believe.

I'll also include links to other sites where you may find her work.  First is her archive at VerseWrights:  https://www.versewrights.com/deodhar-angelee.html

Next is a link to her collaboration with artist and poet Bea Garth:  https://eosthecreativecontext.com/2017/07/30/geography-lesson-poem-by-dr-angelee-deodhar-art-by-bea-garth/

For more information about Angelee's thoughts on haiku, you may read this 2014 interview published by both GLO-MAG and Cafe Haiku:  https://cafehaiku.wordpress.com/2016/08/16/angelee-deodhar-a-life-in-haiku/

Angelee was also known for her Journeys anthologies of haibun:  https://abookwormsmusing.wordpress.com/2017/07/05/book-review-journeys-edited-by-angelee-deodhar/

I will finish with a link to her notes on her haibun "Ratatouille":  http://haibuntoday.com/ht114/Articles_Deodhar_Ratatouille.html

And, of course, there is the music:

Posted by Marianne Szlyk at 6:05 AM