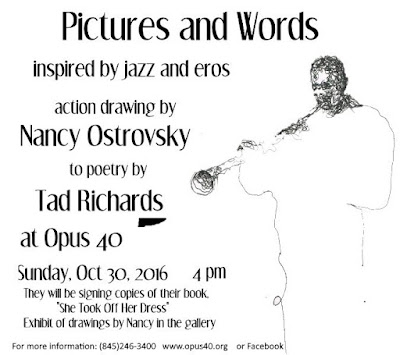 On the weekend of October 29-30, the Gallery at Opus 40 will host an exhibit of drawings by Nancy Ostrovsky from the book that she and I collaborated on, "She Took Off Her Dress," poems by Tad Richards, drawings by Nancy.

On October 30, at 4 pm, there will be a joint performance: poetry reading by Tad, action drawing to the poems by Nancy. She is noted for her action painting and drawing to jazz, and has performed at jazz festivals in this country and abroad. He is a widely published poet in journals and anthologies.

For more information about the Gallery at Opus 40, see this link: http://www.opus40.org/

SHE TOOK OFF HER DRESS

Begin with simple tunes, Gregorian
chants, minstrelsy, fluid
over a pleasing drone;
start listening for
familiar motifs.
you’ll warm to it.
It will set the tone for later.

Playing more than one melody
line at the same time, we had to invent
rhythm. We sang parts:
“We are five young and
pretty shepherdesses,
who skip over the hillside
playing our bagpipes.”

Women drink free
for the first hour –
bar shots only.
Music’s on CD,
not the best stuff.
You remember how he wrote it.
Etude for two pianos,
it bloated to a symphony.
eighty two pieces.
Too big. You asked him,
“What about the pianos?” and he
wrote one back in: concerto
for piano and orchestra.
Too noisy in here
for etudes anyway.
Piano and strings
trade crescendos,
ever briefer;
someone puts a hand on your thigh.

I wish I hadn't posted so many videos of Tommy Flanagan last time.  Let's try someone else this time around.

Walter Davis is another pianist born during the 1930s.  As his Wikipedia page points out, "Davis was known as an interpreter of the music of Bud Powell,[1] but also recorded an album capturing the compositional and piano style of Thelonious Monk."  So let's have a listen!

Here is his medley of Monk from 1986.  It was recorded in Washington, DC.  The name of the club is not listed.
https://www.youtube.com/watch?v=Lg3lLR3BDZU

Here he plays with Dizzy Gillespie and Milt Jackson: https://www.youtube.com/watch?v=mxqVckeFTaE