Tad Richards and Sheikha A. Tonight Tad Richards combines two of my favorite things: jazz and weather imagery.  The poem below is from his collaboration with visual artist Nancy Ostrovsky.  It's also part of a series "about a young woman, the daughter of a modestly successful jazz musician, who has left her husband and is trying to figure out who she is, mostly using jazz as a conduit to her inner self." This time the jazz musicians whom Tad invokes in this poem are men born in the 1930s: Hank Mobley, Wynton Kelly, and Lee Morgan.

THE WEATHER CHANNEL
A front of warm air reached our region
around noon today. During
the afternoon, it will ooze on in,
probe with sticky, eighty degree fingers,
so that, she supposes, she could drive
in and out between yesterday’s clammy cold
and the oozing certainty of muggy heat,
like a county with local option on daylight saving,
or the sound from her rain-drenched speakers,
a few bars of Hank Mobley’s reassuring bebop,
then silence. She imagines the missing solo,
how Wynton Kelly might have picked it up,
brought it to where the sound kicks in again.
Lee Morgan is a harder read. Lost,
she moves inside to the weather channel.
The front is squatting now, threatening
impossibly heavy storms—or did he say
possibly heavy storms? A guy calls,
she met him last week. He just wants
to make sure she has candles on hand.
Hurricane lanterns are better. She asks him if
he could fill in the missing parts of a Hank Mobley solo.
Sure, he says. How about Lee Morgan?
Sure, he says. Him too.
No, you couldn’t, she says.

I also want to add two poems that Sheikha A., a poet from Pakistan and the United Arab Emirates, has sent me.  Her first poem "Swaying Crows" reminds me of all the crows I see in my neighborhood these days: flying, perching in trees, even strutting down the street with the kids.

This afternoon, crows opened
their mouths to pigeons:
a debate on lost seasons.

It wasn’t long until a murder crowded
the neighbour’s sill drowning out
the sun from warming the water bowl.

In my city, leaves have yet to see
the gloriously transparent
red visit for a coating.

The poor leaves know just one colour:
when smoke from roaring motors
plough their roots, these leaves know

just one way to bloom. Crows have
(always) the vision of a surly lover.
Voices that have been told

they’re too loud for an evening
with the stars. How leaves hatch
neglect intelligently

while crows sing
like refrain just grew a rose. 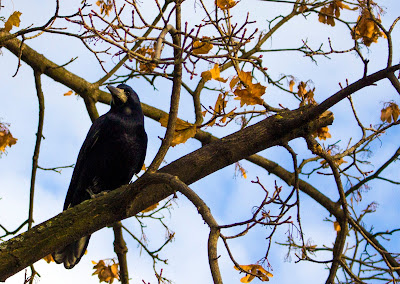 Sheikha A.'s poem about rain fits in well with Tad's.

The books are in their shelves.
My mind wired to the tunes

of reluctance refusing to leave
the clouds. The earth edging.

Winter’s feet have not learnt
to walk on sand. The bickering

of rain heavy within the sky.
My pages are drier than fruits

I grow obscurer in your gaze.
The rain loses core –

Last week I played a few by Lee Morgan, so I will just play this one (relatively) early song "You Go To My Head":  https://www.youtube.com/watch?v=dMsBCDVXHGc

Here Mobley plays with Morgan (and a few others) on "All The Things You Are": https://www.youtube.com/watch?v=5aKbALH8UNI

Kelly and Mobley perform "On a Clear Day" in Baltimore:  https://www.youtube.com/watch?v=cfbiIpwcaZY

Posted by Marianne Szlyk at 8:44 PM